My most recent  debacle is no longer a tragedy thanks to Sed4tives (Thanks!). ;)

I made an extra long space in Specials so that the line height and/or leading would work out with the 2x2 blocks (at least, in Fonstruct previews).

The idea is to have a spinning ying-yang symbol as the pattern to qualify it as a counter.  Plus, it's a container, using the negative space where the pattern is broken-up, to define the characters.  I also used mini ying-yang symbols to round some of the edges, or perhaps to define a boundry that required it.

I messed up.  The pattern is supposed to be the ying and yang symbol as it turns a quarter turn each next time it appears goung across and down.  There's the counter qualifier.  But somehow, when I put the pattern together I messed up.  It's fixed in the M and from l onwards, but now I gotta look at it and see whether or not I want to fix it.  Seems these patterns aren't as easy as they look. And of course, there's that line height, or leading issue that keeps biting my ass.  I can't seem to make a decent sized font because it all gets stomped together.  And it's not that big.

Lowercase has been updated to have the correct pattern of whirling ying-yang symbols.  I'll tackle uppercase later.

A font that shows patience ... Frankly,  I hadn't seen  the 'unplanned' arrangement of the symbol. Regarding the waiting circle we all meet at times : I dance with it ;)

I suggest u should make a dummy glyph that occupies the right amount of grid size to make the preview show propper vertical spacing. Because now a pretty nice idea can't shine at all with this leading!

This is what I do to correct this.

Basically placing a single brick far enough bellow the baseline would do the trick.

@Aeolien, The flaw is still there in all the capitals (except for M).  But I fixed it in the lowercase characters, now on to the the caps (eventually).

@Sed4tives, thanks for that.  I could NOT figure out what in the world was wrong.  But that explains it, and now I have a ton of fonts I might be able to save (made them private because they were an embarassment).  Actually, when I saw all the issues, I made almost everything private, even if it didn't suffer from the same issue, because I didn't know what else might be wrong, and haven't had any reason to make them published again.

I had a few samples public, just to show the issue, but no one seemed to notice.  So now I can go through and fix the ones that are broken and make a bunch public again.  Thanks, @Sed4tives!

I was trying some points like you with similar results: a lot of work and then the glyphs and the background dont work exactly like you need. It's a unsolved matter for me. I add you one sample.

Thanks, @elmoyenique. I haven't been feeling well most of this week.  But I'm still going to try to get a handle on it. Good luck with yours, as well.

@Symbiotic: You're welcome mate! Lets hope you can get many of your works back public again. :)

Hmmm... OK, because of the line height or leading issue that occurs when using 2x2 bricks, which is what I normally use because I always want much bigger curved blocks, I had to make some of the blocks really big in order to get them to display right here.  However, Adobe Photoshop then creates way too much leading because of the line height, which is why I am indicvating the font size and leading size.  At 600 pixels per inch I can see that I should probably increase the monospace font spacing to, maybe, 32?  So, I'll go try that real quick... 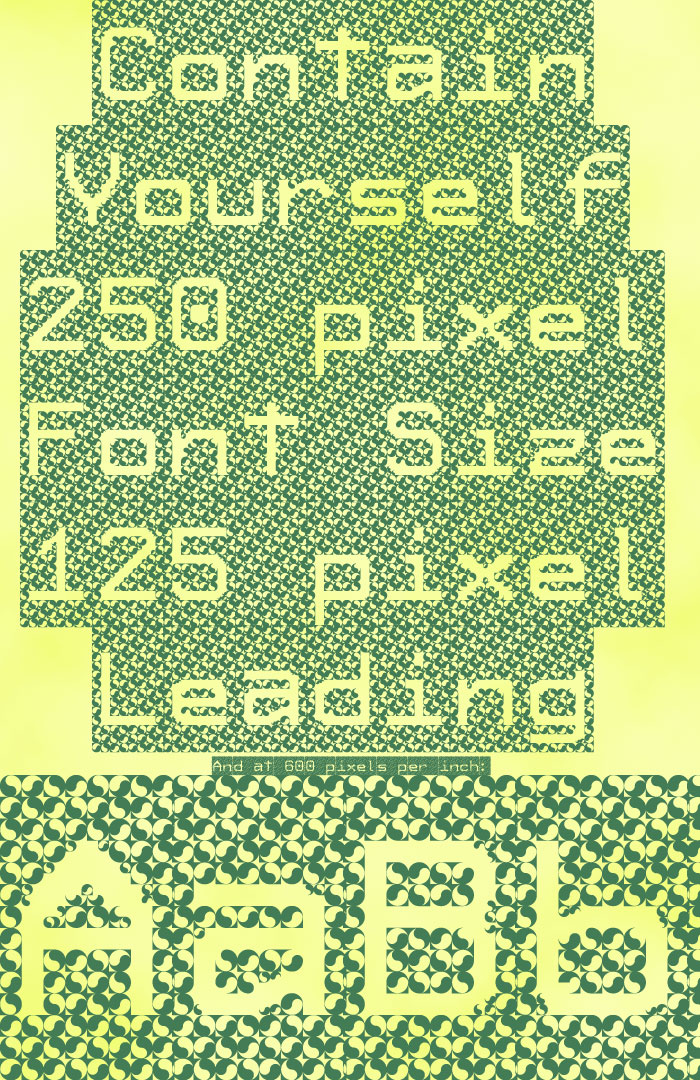 Funny, it doesn't look like that adjustment even mattered.  The font is at size 600 pixels (and Photoshop is set to use pixel sizes) while the leading is at 305 in this sample.  Maybe I'll try a spacing of 36...

If I change beyond a spacing of 32, it doesn't look right in FontStruct and has extra space between the letters.  So, oh well.

This design rules! Every time I see it, I get an optical illusion from it. My eyes tell me the pattern or text are slanted, but they're not.

Thanks, @zephram!  I actually had another vision for the contest, but I realized that I wouldn't have enough time to do it, so I tried this.  ;)  There is a diagonal path to the pattern, too.  I do see what you mean, though.

I think of it as a one of those tape guns that we used to use to print our name and mark our stuff, how the edges were never crisp, but faded from the tape stretching as the gun pressed each letter in.  Of course, it would have to be a patterned tape to pull this off.

Darn, I see that when the characters line up and a return forms extra lines, the pattern has a hiccup between the current line and the next.   Oh well.