Ahh sadly due to repeatedly running into a corrupted font when I save newly made changes to it, it eventually catched up with me and tested the limit of my patience.

I have had to painstakingly restore the font 5 times already since I started it.

So I stopped including new characters as well as making new changes to its existing character set. (At least for now)

Too bad because I wouldve loved to see this truly getting finalized.

So at this stage there are still a number of characters that remain in rough condition, and had yet to be further optimized.

The main A-Z alphabet luckily already was close to how I invisioned it, but especially the numerals, symbols and accents still have some rough edges.

Now, forgetting all that, I still think it is not a bad font at all. Everything is there for most common Western-European languages, somewhat still making this a usable font that I shouldn't be keeping in private!

I hope that despite my bad luck this time, y'all still like it.

The idea was to make a classic Didone style display serif that is meant for making clean headline text similar to those often seen in older magazines or newspapers. I set out trying to design a semi-bold & slight expanded looking letterform with thin hairline serifs and strokes. I choose a large grid scale for the extra freedom in custom shaping this provides.

Technique I used in this design:

This font in particular I have experimented with working within a "(asymmetrical-) Grid Scale ratio" ( 1,5:1 ), so, changing only the value for the Horizontal grid scale. (This distorts the grid aspect ratio, and is a great way to discover and experiment with getting new forms and shapes).

The 1,5 : 1 ratio was specifically choosen to keep maths simple, in order to rebuild certain required bricks that build specific slope angles , such as a 45° (which is no longer possible to make from the FS default brick set when using asymmetric scale ratios, unless making composites).

But what this also does is opening up a totally new approach to making shapes, and.. becoming quite a surprisingly easy shortcut to get unusual shapes or make variations on these, even with as little as just the rotation of the bricks/selection. (thanks to the distorted aspect ratio)  :-).

This is a must try for those who are into large grid designs, fake curves or interrested in experimenting around a little. 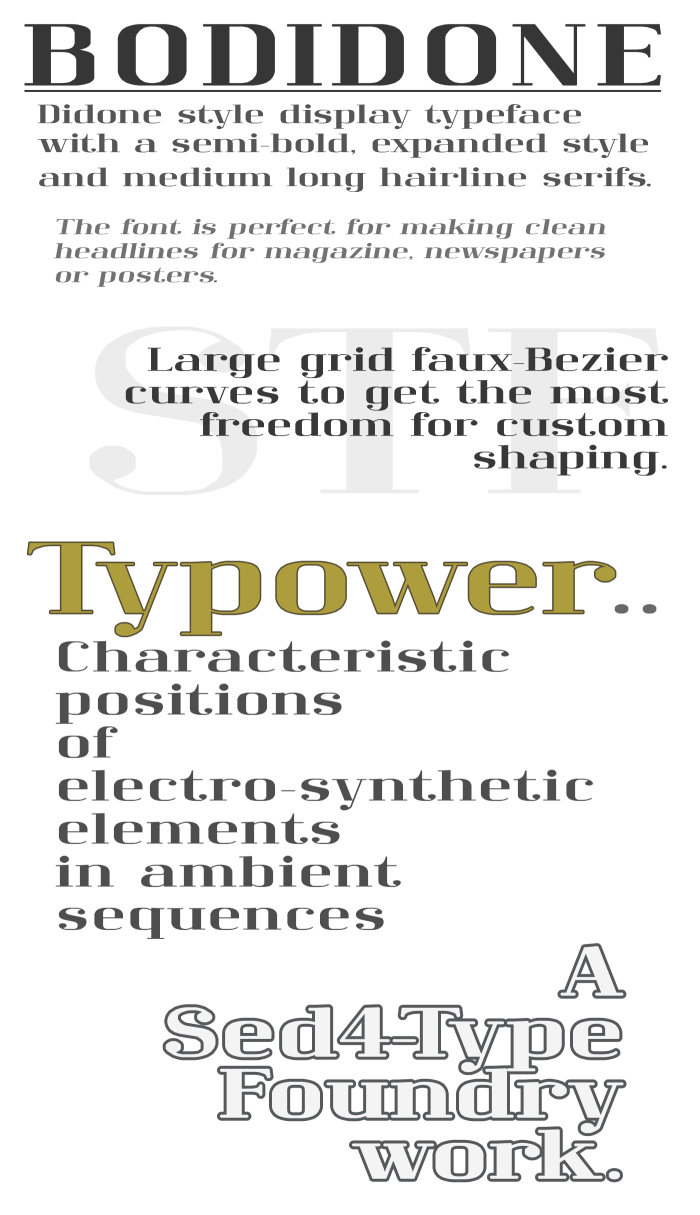 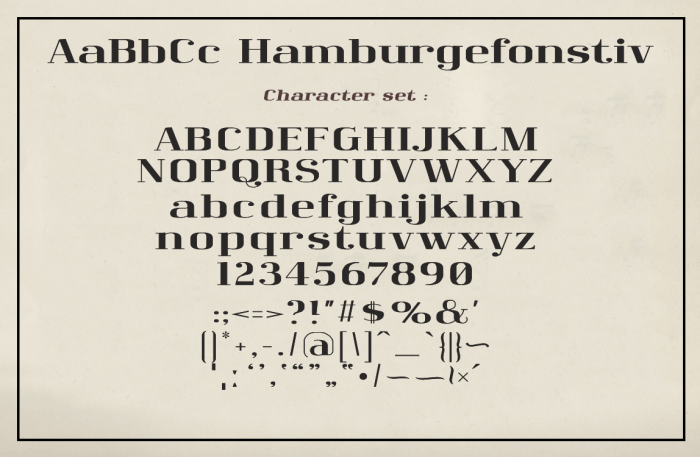 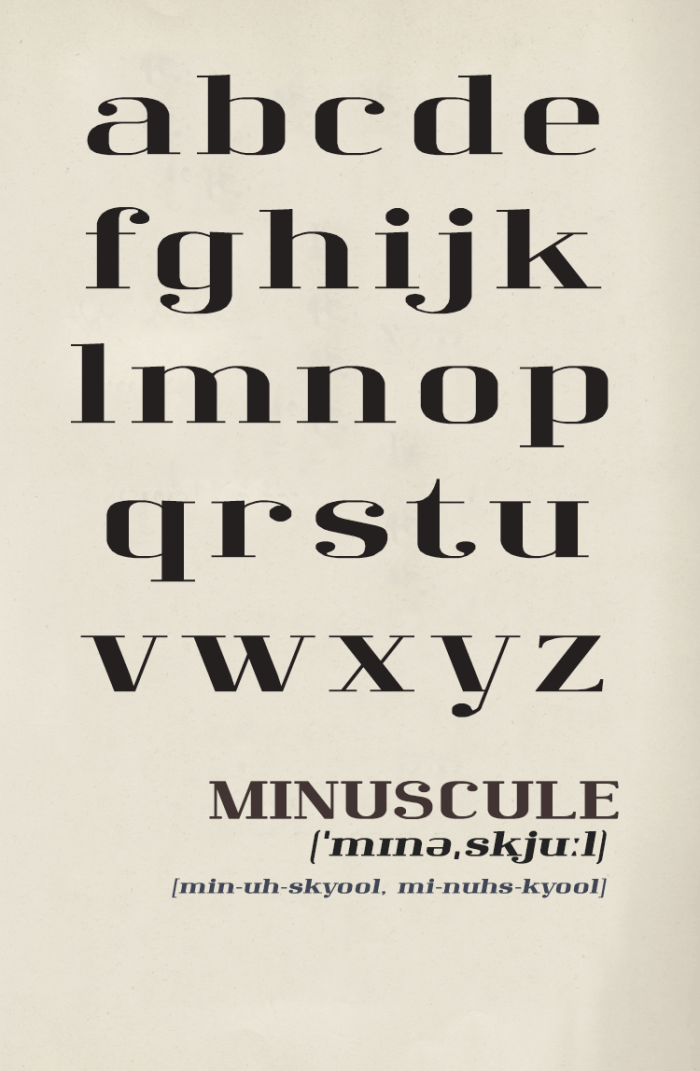 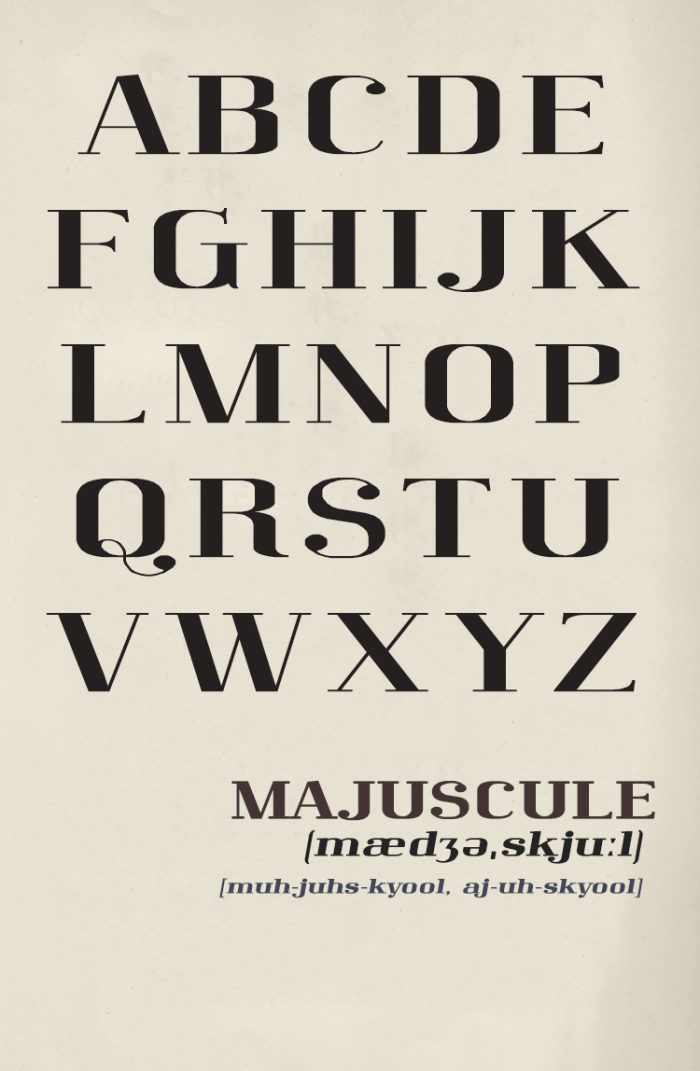 The Asterisk up close... 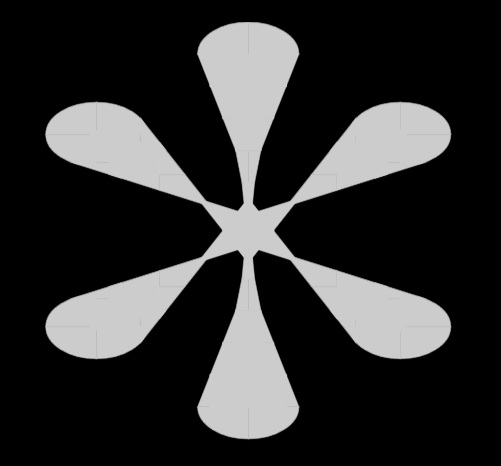 I simply couldn't accept it that corruptions forced me to abandon this project. So I created a way to continue work at it. First I made a secondary clone, cleaned that one up as well and made sure I got rid of the corruption, saved it and double checked it by refreshing the editor. At last I made a clone of the secondary version too, and guess what? I actually was able to clone this one without the corruption transferring to it, So..
Now that I had 2 extra clones as a backup, I opened one FS editor and continued work in it. Once I added a new glyph I saved this font, went to my gallery page to see if it succeeded this time in not corrupting once over, and of course it got corrupted too. So I deleted it.
Cloned the other additional backup once more so that I would have 2 backups again. Now I opened both in a new window and simultaneous loaded them into the editor, Again I created a new glyph, but this time,  instead of saving the font I had just drawn the new glyph, I now selected the new glyph, copied, and pasted in the font that was loaded into the editor on a secondary browser window. Now I tried saving the font I had just pasted the glyph into. (Not very hopeful) loaded its font page to see how it succeeded, and surprisingly enough this had somehow not corrupted the font!  (JACKPOT!!)
Closed the the other remaining editor window into which I had drawn without saving, so that it would restore again!

In other words, I found out a bullet proof way to resume work in the 2 backups.
Still the 'million dollar question' remained, and most important had yet to be verified.
So, I did the exact same copy/paste thing one last time. This time into the original font instead, held my breath, and saved it again. Went to see if this one had succeeded as well, and 'holy sweet mother of a gun' it did !! Not corrupted.

So, hereby I can happily announce that work on the original font has resumed. Progress will not going to be as quick as usually since there are two additional extra steps are involved this time, but at least now I could see things get finalized.

And the first couple of changes were made today.

I started with improving the glyphs that had a need for it. Smoothened some additional curves here and there. And added some extra glyphs as well.

So far so good. All new things that got pasted into the original version were saved without a hitch, not corrupting it yet. More updates follow... Cheers

Elegant work! Glad you got it working.

For the future, have you tried using Shift+T? That might fix issues with bricks (unless there aren't any issues, in which case it may count all the bricks as unused)

@ Sarela Thank you so much, and I use it every now and then, in this spefic fonts case its would ruin my custom brick pallet, since there is no glyph location in which I placed my complete custom brick collection (and its huge), so Shift+T would remove many bricks I might still need for various reasons later on.

That level of smoothness is awesome…

Thanks BMW! Serious amounts of work went into achieving that, and still there is room for possible improvements.

Wonderful high contrast serif following the footsteps of nineteenth-century classics: Bodoni, Didot, and Walbaum. The simple yet elegant forms, precision, attention to detail, and the generous Latin character set are all proof of tremendous effort invested in this project.

Thank you for writing a nice intro and sharing some details about your creative process. I fully sympathise with you in your distress, having similar difficulties of myself. I know how it feels the frustration and despair over lost work. Whenever you embark on something ambitious, something exceptional you always bump into technical limitations.

The most important point: you've found a solution. When I deal with a large number of custom bricks, I usually make small swatches of each of them, place them on some unused glyph of the extended Latin set, organize them by shape, and keep them until the very end of the project.

@ Frodo Thank you so much for your kind words. You couldnt be more right. About the the tip of making swatches, I really shouldn't skip this task so often! *shame*

Many changes have been made to various characters and their finer details in order to achieve better consistency.

* Much improved S/s, making it match better with the overall weight contrast.
* Replaced lowercase g with a looped version.
* Subtle changes made to various ball terminals.
* Expanded both f and t giving them a slight wider appearance. 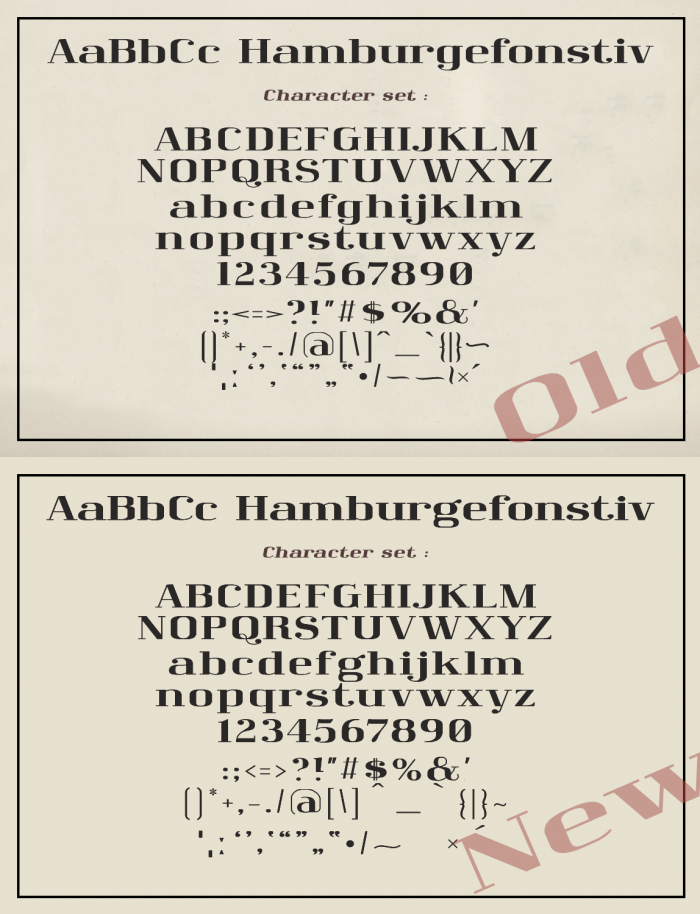 Thank you so much for the top pick Rob!