Here is my fourth attempt to make a narrow font that accentuates diagonals. It seems to be a good programming font at size 10. It makes it surprisingly easy to read upper case consonant names.

Design is as follows:

Monospaced of course, because code pretty much requires this. Code fonts are built for both reading and editing, and when some letters are very narrow like the i and l in most fonts, that makes them very hard to select with a mouse and therefore very hard to edit and makes these fonts very hard to use for programming. In addition block cut and paste is important for programming and monospaced is required to do this easily.

Small sizes need to be easily readable. Sometimes you need to be able to see a lot of code on one screen.

Glyphs are wide in the center of each letter so that diagonals and crossbars are easy to see, and narrow toward the top and bottom so that the characters pull away from each other and are easy to tell apart.

Numbers are really large. It doesn't hurt at all for numbers to stand out in programming. This is ok because numbers never have diacritics. The 7 has a bit of a scoop so it does not look like a 2 when underlined.

The dots are large and distinct so they show up easily in code.

At least one block touches the right edge in each glyph so that Visual Studio can figure out what's going on. This also means that many glyphs do not touch the left edge and some narrow puctuation glyphs have a tiny extra block off on the right edge.

Floating a little bit above the zero line helps in dealing with underlines.

Sans Serif (mostly) so that you can cram glyphs together more tightly.

Diacritics have lots of space since the area above and below the capitals is more than 2 blocks, so they can be added later on.

Narrow enough to be mistaken for an informal text font although since it is designed for two dimensional work, simple lines of text are not that easy to read.

A little too thin - A little bit too thin to be easy to read on a pixelated screen below size 10, although it does print very nicely, so I am labeling this Friendly Geek Light, and I am building a Regular and a Bold font also.

Made the 'h' lean to the right to distinguish from the 'b'. Straightened out the '+'. Made the 'F' drop below the rest of the upper case to make it look less like an 'f'. Heightened the 'v' to make it smoother.

Here is yet another monospace programming font.

At size 10, Friendly Geek seems to compete fairly well with regular fonts even though it is a monospace font. Here are some comparisons with other fonts.

The underscored fonts are the monospace fonts. 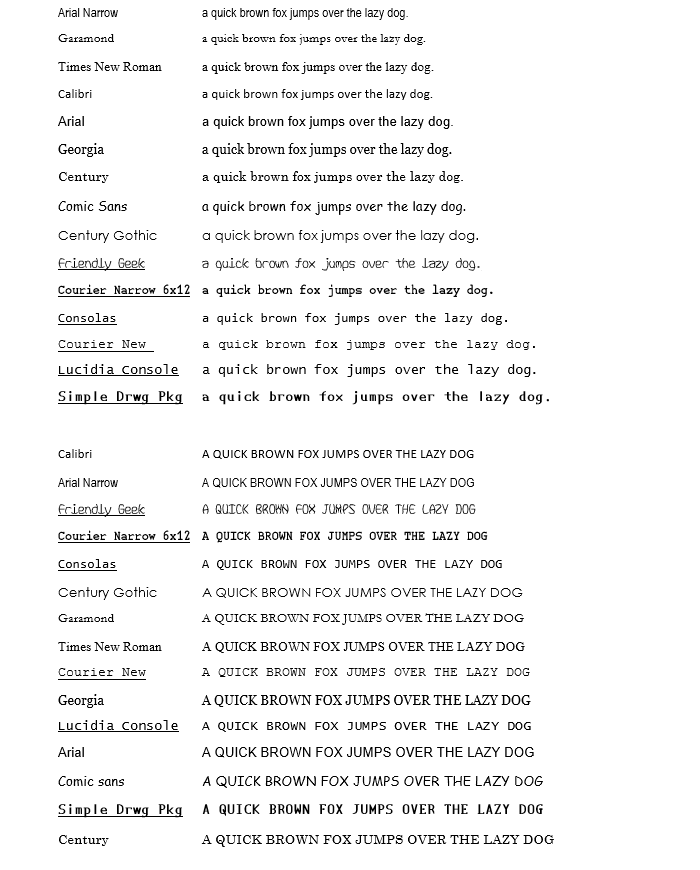 Why stray bricks in the punctuation?

The reason is that Visual Studio (my coding IDE) has trouble handling fonts properly, so to make it work, I need to have the rightmost block of each glyph touch the right edge of the fifth block. Most punctuation is too narrow to do this with naturally. So I add the tiniest block possible to make VS work.

I don't think there is a way to create an empty brick. Even if we had one, I don't know if Visual Studio would respond to it properly.

I like this family of fonts a lot. They're stylish, but still well-suited for terminal use. And they're also very legible at small sizes. I think the diagonals give it a more timeless look. It could be retro or futuristic or anything between!

@zephram, thank you for the compliment. The style is almost entirely created by the needs of the font. I don't do style too well and I really enjoyed making something stylish using an engineering approach.